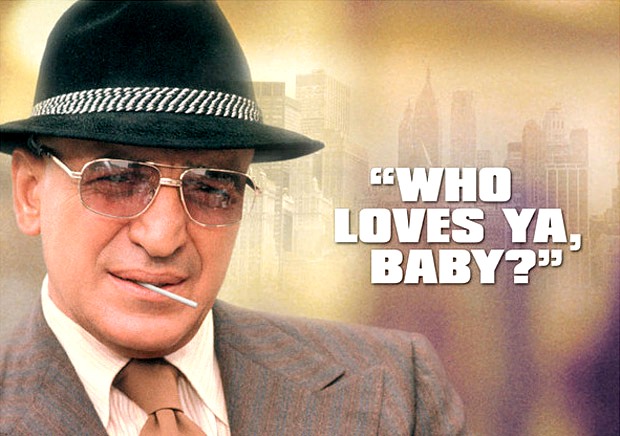 Savalas’s best-known role was as the star of the television series Kojak. The series originated with the TV movie pilot The Marcus-Nelson Murders (CBS, 1973), which was based on the real-life Career Girls Murder case. Savalas’s character was named Theo “Kojack” in his first appearance.

Lt. Theodore “Theo” Kojak was a bald New York City detective with a fondness for lollipops and whose tagline was “Who loves ya, baby?” (He also liked to say, “Everybody should have a little Greek in them.”) Although the lollipop gimmick was added in order to indulge his sweet tooth, Savalas also smoked heavily onscreen – cigarettes, cigarillos and cigars – throughout the first season’s episodes. The lollipops, which Savalas later admitted. had given him three cavities, were also part of an (unsuccessful) effort by Kojak (and Savalas himself) to curb his smoking. The critic Clive James explained the lead actor’s appeal as Kojak: “Telly Savalas can make bad slang sound like good slang and good slang sound like lyric poetry. It isn’t what he is, so much as the way he talks, that gets you tuning in.”

He was nominated for an Emmy Award for Outstanding Lead Actor in a Drama Series two years in succession, winning the Emmy in 1974. He was also nominated for the Golden Globe for Best Actor in a TV Drama Series from 1975 to 1978, winning twice, in 1975 and 1976. His younger brother George played the regular role of Detective Stavros – a sensitive, wild-haired, quiet, comedic foil to Kojak’s street-wise humor in an otherwise dark dramatic TV series.

Kevin Dobson played the role of Kojak’s trusted young partner, Det. Bobby Crocker. The on-screen chemistry of Savalas and Dobson was a success story of 1970s television. After the show’s cancellation, Dobson went on to further fame in the popular prime-time 1980s soap opera Knots Landing. As a result, he did not appear in a majority of Kojak TV movies. Savalas and Dobson were reunited on-screen for one last time when they appeared together in the 1990 TV movie Kojak: It’s Always Something, where Dobson’s character was a lawyer – similar to his role on Knots Landing – instead of a police officer. Crocker, specifically, was a prosecutor in the storyline; his police experience had evidently given him a rich background from which he could draw when he studied for his law degree.

Kevin Dobson said of his first meeting with Telly Savalas: “The moment I met Telly Savalas, we shook hands and our eyes met and locked and the chemistry was there.” He also added: “The lollipop started in the 5th show. We were in Kojak’s office and Telly said, ‘Hey Kevin, I need somethin’ here.’ George handed Telly an apple and I said, ‘no,’ and a stagehand was standing off to the side (half asleep) with a lollipop jammed into his shirt pocket, along with cigs, pens, toothbrush, etc., and I said, ‘Yo, the lollipop’, as I motioned with my fingers (gimme the tootsie pop), and then said, ‘Telly, here yah go!’ Thus, the beginning of the ‘lollipop cop.'” He also said about Telly Savalas’s new determination off- the Kojak set: “He wanted to stop smoking. A friend of mine on the set had a lollipop in his shirt pocket, so I flipped it to him. … That started the lollipop cop.”

In 1978, after five seasons and 118 episodes, CBS canceled the show because of lowered ratings. Savalas was unhappy about the show’s demise, but he got the chance to reprise the Kojak persona in several television films.